Storing Temporal Data with Tree-Like Structures in an RDBMS

Persisting a tree to an RDBMS is, in general, a solved problem: there are at least four effective data models that allow you to keep your hierarchical data stored safely and with various degree of referential integrity.

However, let’s say you want to store a company hierarchy and be able to answer questions like “who was CEO on 2017-01-03?” and “who was on John’s team on 2013-09-12?” This task requires not just storing the tree, but also being able to “time travel” back to any point of time and restore that tree at that time.

When a task like that came up at work, it turned out that knowledge on this particular subject is a bit scarce, but the general consensus is that you use whatever method you prefer and store two timestamps (valid_since / valid_until) alongside your nodes or edges and scope all your requests correspondingly.

I have used different methods of tree storage before, but it still wasn’t immediately clear which method would be better adapted to that task since you would have to make more requests, store more data, and sometimes have to rebuild large parts of the trees when something changes. Thus, I decided to run some benchmarks.

Before we go further, I must mention some particulars of the task I had at work: we have a medium-sized (~20000 nodes) tree with very infrequent updates (<20 / day) and frequent reads (easily tens of thousands of these per day). This is important because we can largely ignore destructive operation costs as long as our queries are fast. If your data has different read/write characteristics, you will need to run your own analysis.

For these benchmarks, I generated several datasets containing a mix of queries and destructive operations. It’s easier to explain using an example:

There are three basic types of modifying operations:

There are also two types of queries:

These events are not equally frequent in our practice, so the following distribution was used:

You can see that each set is about an order of magnitude larger than the previous one.

This is probably the simplest and the most familiar way to store a tree. Every node has a parent_id key that refers to its parent and valid_since and valid_until columns. When you change a parent, you only need to update the valid_until column with the current timestamp and insert a new node with the new parent and valid_since set to the current timestamp. When you implode a node, you need to create new nodes for each direct children and that’s about it.

Let’s try making the previous method a bit more effective. What if we made a periodic snapshot of the whole tree? We would only need to run our queries on the subset of the table that is the current snapshot + maybe some delta changes between snapshot time and current state.

Technically that looks like this: we create another table versions that has just two fields: id and timestamp. Every node has also a version field that refers to the id for that version. Every several ticks (hours/days/whatever) we make a snapshot, meaning that we copy all the active nodes from the previous snapshot with the new version and make the new snapshot current. All new writes are directed to the new current version.

Note: this method was only tested on MySQL.

PostgreSQL has a standard ltree extension that implements the so-called “materialized path” pattern. You store a string-like path for every node that contains that node ancestry. For example, for node (3) that is a child of (2) that is a child of (1) the path would be 1.2.3. This Postgres extension is interesting because it supports gist indexing of the path column, supporting queries like “select all ancestors of path” or “select all descendants of path”. However, for ancestors we can do even better: simply split the path string on dots and reverse and there you have it.

Note: this method was only tested on PostgreSQL.

This is a relatively new method for me, one I have never used before. There is a good intro here. The gist of it that you store both ancestor and descendant info in a separate “closure” table.

My intuition suggested that the parent_id + timestamps method would probably be the slowest, parent_id + snapshots be the fastest, and ltree and closure tables somewhere in-between. My rationale was that the snapshot method would have the least data to reason about for any point of time and as such have the best selectivity for its indices, whereas the ltree and closure tables methods generate a lot of extra stuff for any update that would really trip up most queries.

Well, I was wrong on all counts. In actuality, the parameters of my dataset generation made any extra garbage generated by the modifying ops negligible. If the node changes 20 times over the lifetime, that’s nothing, nothing at all. Any index by key would have fantastic selectivity. Besides, for such smallish datasets the storage requirements are also really, really small. 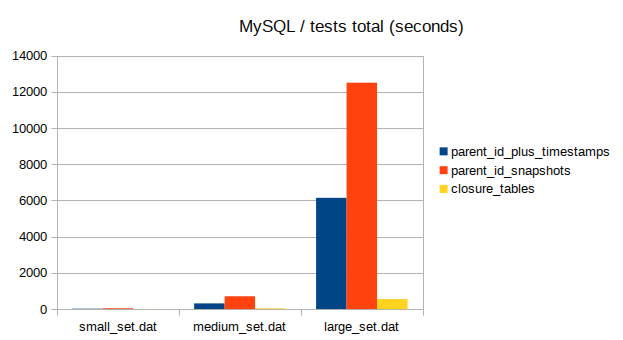 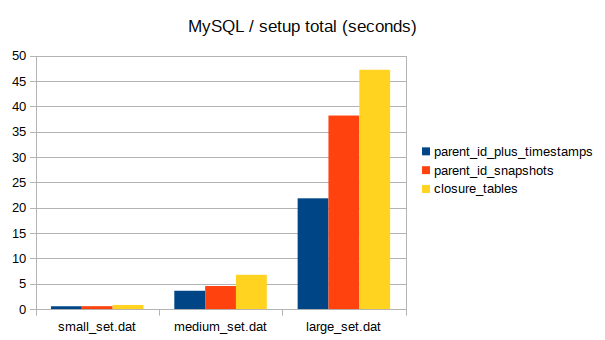 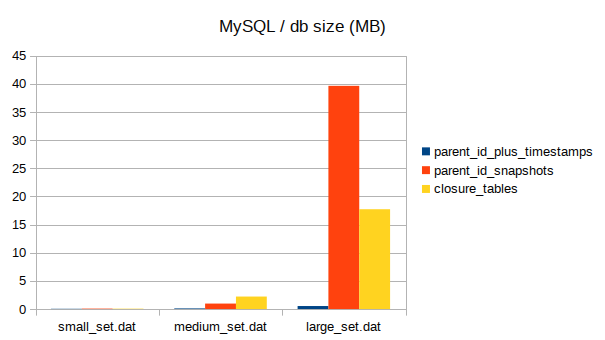 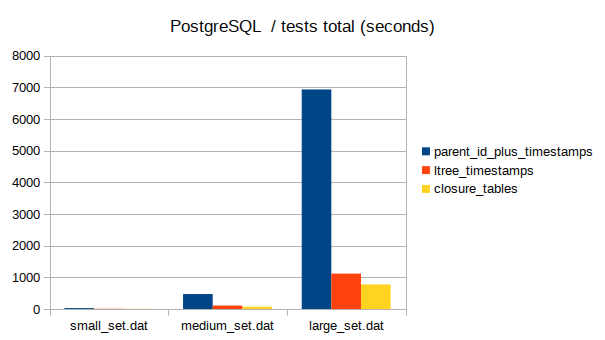 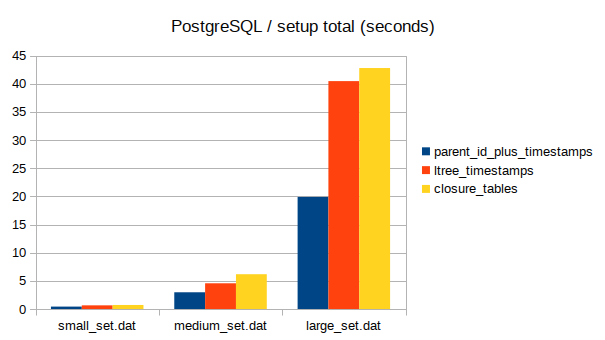 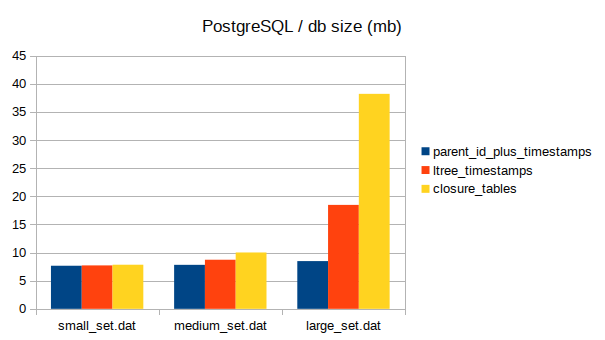 In my testing, the closure method ended up being the fastest, closely followed by ltrees, with parent_id being way slower and parent_id + snapshots being the slowest of the bunch.

The latter result was surprising to say the least, and some of the slowness could probably be attributed to the fact that infrequent updates + snapshots means you have a lot of rows in your table from snapshotting. You also don’t win as much from the snapshots as you would if updates had been more frequent. Also, any ancestor/descendant query would also require getting the corresponding version, which meant an extra query to the versions table (admittedly that could be optimized by having some in-memory cache for versions and carefully managing that cache). Either way, other methods were so much more effective that I didn’t feel the need to play around with snapshot thresholds or other params.

In conclusion, my first recommendation for this kind of trees with temporal data sewn in would be closure tables as the fastest and the most universal of all four. ltree would be a close second, having the better support for many kinds of queries and easier ranking for descendants (that would come handy if you wanted, for example, to display nested comment threads or something like that).

Some code and further reading

Test setup, implementation and test generation code for this post can be found here. All the usual caveats apply: code is rough, ineffective and written by a dangerous idiot, please be careful when running other people’s code

Huge props to Jim Menard for proof reading this article.